Rating:
The Poltava Flames of War slot game was released by Swedish design company ELK Studios in June 2016. Flames of War is based on the Battle of Poltava. The Battle of Poltava was fought by the Swedish and Russian armies in June 1709. Peter The Great led Russia to victory at Poltava, which ultimately led to Russia winning the Great Northern War. The Poltava Flames of War slot game gives players the opportunity to win cash prizes and free spins by changing the outcome of the battle.

Poltava is a video slot game that features five reels with 40 pay-lines. Players win by matching images on each pay-line”.

The main images are cards that range 10-Ace. There is of course also a wild symbol which is represented by the game’s logo. The game also has special images representing Combat Arms. There are three Combat Arms in the games: 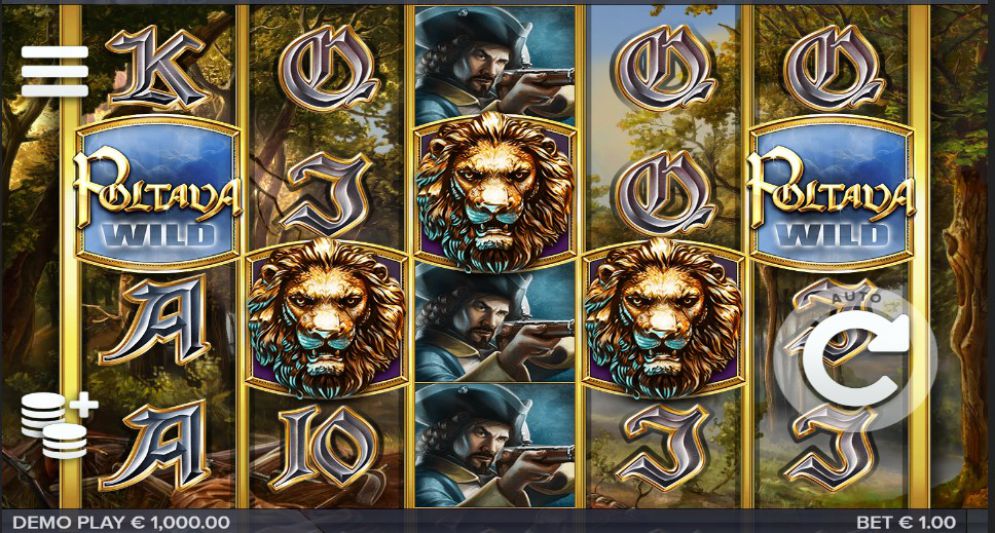 Players win prizes ranging from 25 coins to 200 coins for every 100 coins bet by matching various combinations of the game’s symbols. The 200 coin top prize is won by matching five horse symbols.

Poltava permits players to place bets ranging from 0.20 to 100. The game also allows players to pick between four different betting strategies. Players can activate one of the four strategies once they access the betting console by clicking on the stack of coins icon in the lower left-hand portion of the screen.

Players who use the “Optimizer” strategy elect to have their bets adjusted automatically. Bets for each spin are based on a pre-selected percentage of the player’s game account balance.

Using the “Leveller” strategy raises bets by two levels after every five losses. This strategy continues until the player wins.

The “Booster” strategy raises the player’s bet by one level after each loss. This strategy continues until the player either wins or the bet is raised four levels.

Finally, a player can also elect to not use one of the above strategies, in which case they pick a set amount to bet on each spin.

Poltava Flames of War’s bonus spin structure can be a little difficult to understand until it has been seen in action a few times. But once understood, these bonus features make the game very exciting. In addition, the game has great graphics and a good soundtrack. The game’s biggest drawback is the small range of payouts. But overall Poltava Flames of War is an exciting video slot game with many opportunities to win.